Follow @PeoplesWaterDet
The Peoples Water Board holds its meeting the second
Tuesday of the month at 5:30pm at the Cass Corridor
Commons at 4605 Cass Ave. Enter off of Forest. 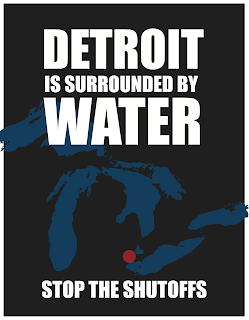 News from The People’s Water Board

DETROIT – With the glare of the international media focused on his inhumane water shut-off policy, Governor Rick Snyder’s appointed Emergency Manager, Kevyn Orr, today handed Detroit’s water department back to the Mayor of Detroit, Mike Duggan. Kevyn Orr released a statement announcing that the Mayor would now run the Detroit Water and Sewerage Department (DWSD). While this is small victory for the rule of law and local control, Mayor Duggan’s reaction didn’t do justice to the hazard or the inhumanity of depriving thousands of children, elders, families and individuals of water.

“We know the Mayor’s been handed a hot mess,” said Tawana Petty of the People’s Water Board. “Orr didn’t relinquish his power over Detroit’s bus system or land management. He dumped DWSD on Duggan because thousands of people have embarrassed him and Governor Snyder by standing with the people of Detroit, protesting in the streets and rallying with Canadians who brought water for families in need. Regardless, it’s now up to the Mayor to implement the Water Affordability Program.”

At the behest of the Michigan Welfare Rights Organization, the Detroit City Council adopted The Water Affordability Program (WAP) in 2005 after the City’s law department vetted the plan. The WAP creates a safety net to allow low-income residents to pay based on their income. It does away with inefficient, inhumane shut-offs and keeps the system solvent. The plan is needed now more than ever given that Detroit’s water rates have risen 119 percent in the past decade while poverty and unemployment are still at record levels.

“The crowds that brought media from all over the world were not chanting for ‘more advanced warnings of shut-offs’ as the Mayor said he would have given,” said Shea Howell of Detroiters Resisting Emergency Management. “If you can’t pay the hundreds or sometimes even the thousands of dollars demanded by DWSD, more warning is useless. We’ve received news that 40 people in a Palmer Park apartment have been shut-off. Has Mike Ilitch paid his overdue water bill? Has DWSD moved in to shut off the golf course? No. Corporations can get by while families are deprived. Is this what Mayor Duggan meant when, this morning, he referred to some Detroiters have to pay for the bills of others?”

The Water Affordability Plan can be found online at http://michiganwro.blogspot.com/p/water-affordability-program.html
Posted by Lou Novak at 5:48 PM

Members of the PWB Coalition